Arbitrum, the Layer 2 scaling solution, has abruptly paused its Odyssey program after it launched last week.

The project cited a heavy load of transactions and spiking gas fees as reasons for the decision in its Twitter thread. Sysyphus, an influential voice on Twitter, highlighted that a swap on Arbitrum briefly cost more in gas than on Ethereum.

As a Layer 2, Arbitrum’s primary value propositions are transactions that are cheaper and faster than those on Ethereum. So if transaction costs are spiking over Ethereum’s, Arbitrum isn’t working as intended.

According to Arbitrum, the program will be resumed once the team behind the L2 ships Nitro. Right now the L2 “throttles” network capacity, but with Nitro, which allows fraud proofs to be run on WASM code, those throttles will be released.

Odyssey is an eight-week program intended to showcase the Arbitrum ecosystem while rewarding users with NFTs for performing basic actions on the Layer 2’s (L2) applications.

As the first week completed and claims for the first NFT went live on June 28, transactions on Arbitrum hit an all-time high, according to Arbiscan. 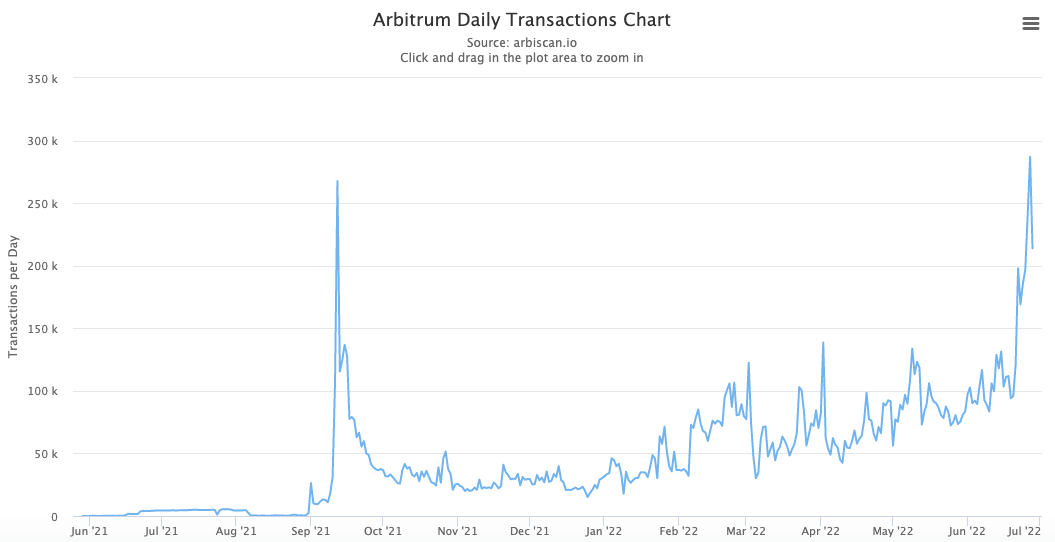 Arbitrum has suffered outages in the past. Once, last September, and again in January.