Bitcoin funding rates had taken a plunge at the beginning of May. While this had not been a pronounced bear trend at that point, the price of BTC was already showing some signs of weakness. That weakness has now seen the digital asset plunge below $30,000 for the first time in 2022 and back up. However, funding rates that had returned to neutral had remained unmoved by this volatility in the market.

Bitcoin had seen some massive sell-offs around the $35,000 level. This was mainly triggered by investors panicking that they may lose more of their holdings and as such, had tried exiting the cryptocurrency to mitigate these losses. The resultant fear and liquidations that had erupted had worked together to push the price of the digital asset even further down, and like clockwork, every other thing in the market had followed this downtrend.

Funding rates would prove to be one of the few immune to this downtrend. After recovering from its crash at the start of the month, it had gone back to the neutral level and this is where it stayed even as bitcoin had broken down below $35,000. Even when its price had fallen lower, funding rates had remained unshaken. 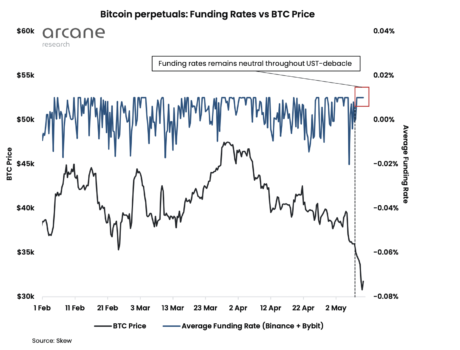 This follows the same trend that had been recorded since the December 4th crash. Funding rates had started on a trend of being at or below neutral and have not deviated from this since then. It was obviously the result of negative sentiment across investors which had led to low momentum.

Another group that this is indicative of is the perp traders. These perpetual traders have been following the spot market closely. This is obviously a deviation from the norm because as seen in previous market trends, the funding rates fall when the price of the digital asset falls.

This indicates that these perp traders are leaning towards adding more long exposure with the digital asset. Mostly, this is happening near what is perceived to be the bottom of the one-and-a-half-year trading range.

Related Reading | Shiba Inu Vs. Dogecoin And LUNA: Which One Will Survive The Crypto Carnage?

The average funding rate is pulled from cryptocurrency exchanges Binance and Bybit, both of which have proven to have the most presence from perp traders. Even though the whole Terra UST issues, funding rates have refused to budge.