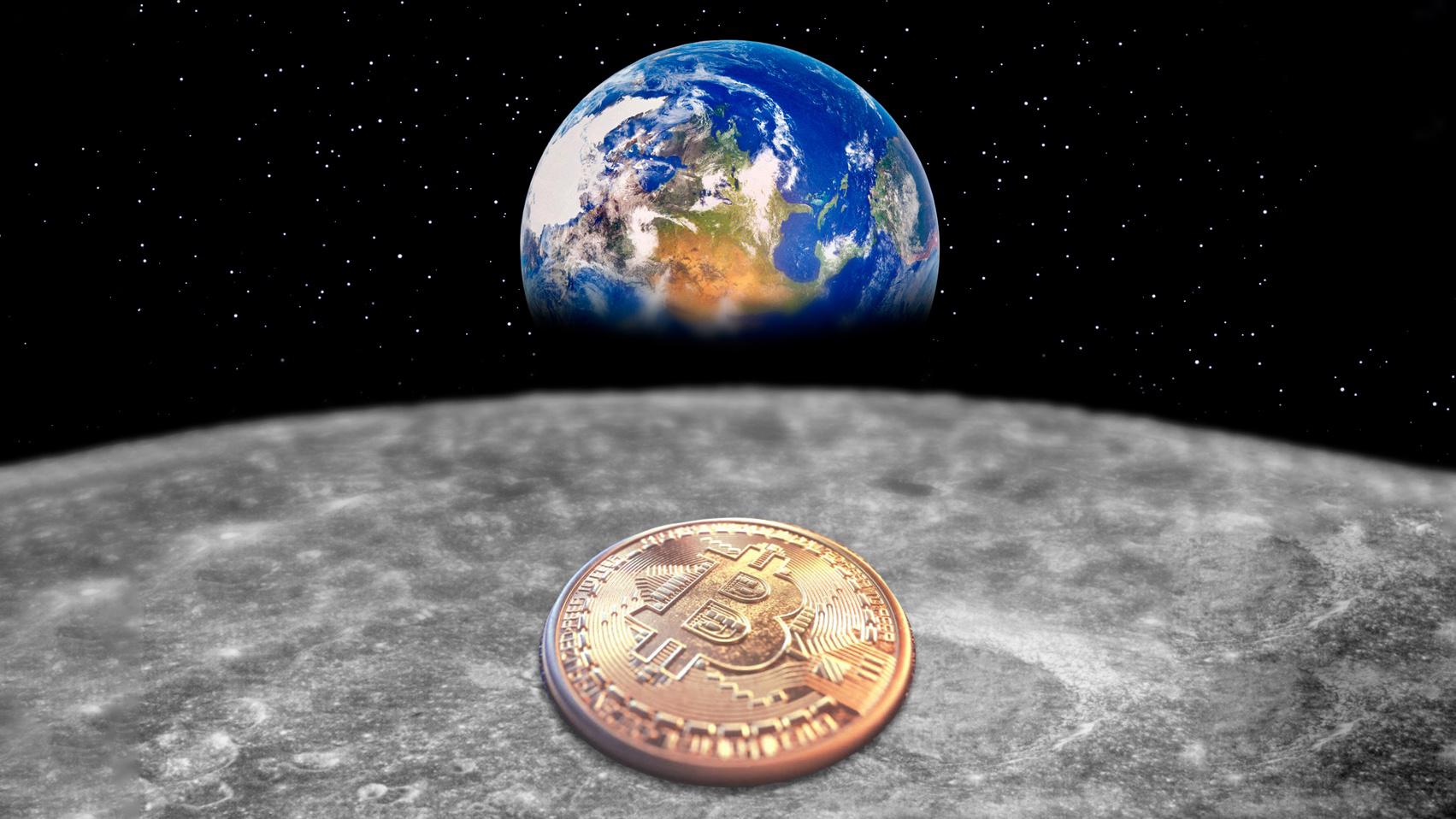 LedgerX co-founder Paul Chou is building on the sale of the company he created by raising capital for a new kind of cryptocurrency that can be spent on Earth, the Moon, Mars and beyond.

average of 28 minutes for a signal to reach Mars, making it impossible using current tech to ensure the same cryptocurrency isn’t spent on two planets at once. It’s called the double-spend problem.

After helping a few LedgerX staffers who lost their jobs in the weeks following his ouster Chou booked a hotel room in Atlantic City and held a brainstorming session on a whiteboard away from the chaos of New York. “We did math and crypto in a suite,” says Chou. “Then played blackjack at night.” The result was a new kind of consensus mechanism that takes into account the time it takes for light to travel from planet to planet at any given point in their orbits around the sun.

“We know how the speed of light works depending on how close Mars is to Earth at any given point,” he says. “Now it’s a coding problem.”

Then, last October, Chou got a call from LedgerX’s first investor: his mom. She still owned equity in the company and had just learned it was being sold to FTX, which is in the process of adapting its licenses to sell highly lucrative leveraged futures. “It’s obviously gonna be totally huge for the business,” says FTX co-founder and CEO, Sam Bankman-Fried, “If and when that happens.” While terms of Chou’s departure from LedgerX are being kept under tight wraps, he says the sale ended up yielding at least a 10X return for his mother, turning her $100,000 seed investment into a seven-figure sum.

The real celebration, however, didn’t start until the following day when his old LedgerX investors, friends from MIT and elsewhere started to call him, asking about his next project? One previous investor told him in a text: “Let it ride.” Jameel Khalfan, a business developer at Google, and a former classmate of Chou’s who calls him one of the smartest people at MIT, has closed his first investment in the firm for undisclosed terms. He’s now gathering a group of Chou’s former classmates, previous investors in LedgerX and others to form a special purpose vehicle with the sole purpose of backing the firm.

“Every kind of building project, every pizza restaurant that’s open requires some sort of financial resources, whether dollars or yen or euros or whatever,” says Chou. “And if we’re going to build that infrastructure on other planets, we need to rethink how that financial system works.” “If you could design this whole financial system from scratch, what does that look like?” adds Khalfan. “To me, that’s the really exciting part.”

Rechristened Foundation Coin after the Isaac Asimov novel about humanity exploring the furthest reaches of the Milky Way, the cryptocurrency is now much more than scribbles on a whiteboard. Chou calls Foundation Coin Inc, a “DARPA for cryptocurrencies,” inspired by the U.S. State Department’s Defense Advanced Research Projects Agency, that laid the foundation for decades-long projects, leading to the creation of the internet, GPS and other “out there” technologies.

Based in New York, Chou’s team of a half-dozen theoretical mathematicians, computer engineers and blockchain developers from the NSA, NASA and Google are figuring out how to build a new financial infrastructure that helps groups of strangers on different planets avoid the double-spend problem without the need of middlemen. Bitcoin solves this problem by using what’s called a consensus mechanism, known as proof of work, that rewards a network of computers that audit the transactions, sometimes taking a few minutes, other times longer than a day. Chou likens this to a traditional race to a finish line.

“Whoever happens to get their first wins,” he says. But given the great distances in space, Foundation will need more precision. An early version of the white paper describing the technology lays out what Chou calls “transition blocks” that offset the delays resulting from planets revolving at varying distances around the sun. These blocks flip the race concept on its head with what Chou calls proof-of-timed-work. “We can fix it so we know we’re going to get a block within a set period of time,” he says.

Though bitcoin can be sent via the traditional internet or satellite-based alternatives, Foundation will require super-powerful alternatives. NASA already has an array of global radio satellites, the Deep Space Network, sending enhanced signals to spacecraft on other planets. But Chou would prefer the hardware not to be controlled by a government. “I am not talking about sending a confirmation on ACH or a wire transfer to Mars, because who knows who’s gonna be there?” says Chou. “What happens if the laws get changed on Earth, or they put a hold because the Fed says this or that? You don’t want the bureaucracy to slow down the progress of what the people on Mars are trying to do.”

fine print codifies Musk’s vision for interplanetary communication divorced of government obligations: “For Services provided on Mars, or in transit to Mars via Starship or other spacecraft,” the print reads. “the parties recognize Mars as a free planet and that no Earth-based government has authority or sovereignty over Martian activities. Accordingly, disputes will be settled through self-governing principles, established in good faith, at the time of Martian settlement.”

“Stacks of cash don’t do much on Mars.”

In the United States alone, the U.S. Chamber of Commerce estimates that $31 billion was invested in the private space economy over the past ten years, nearly a third of which—$10 billion—came during the first three quarters of last year alone. While Morgan Stanely estimates the global space economy will reach $1 trillion by 2040, senior CFTC economist, George Pullen, puts the number closer to $4 trillion by the same year.

“In an idealized version of the future space economy, we will have both national actors, private actors, large corporations all functioning together in an economy where they need to buy and sell, and trust each other as they buy and sell,” says Pullen, speaking in his capacity as a founder of consulting firm, MilkyWayEconomy. “Blockchain technology gives us a base layer to solve for that. And so I think by default, that becomes the base layer of all of those transactions in space.”

But what about when things go wrong? Way back in 1967 the United States and the Soviet Union crafted the Outer Space Treaty, now signed by 111 countries, to address concerns ranging from the militarization to the commercialization of space. Space law professor at the Catholic University of America in Washington, D.C., Laura Montgomery, helps launch providers obtain FAA licenses, and argues the regulation defines how governments should act, “and does not extend to the citizenry unless Congress passes a law.” This would be good news for Chou and others like Musk building products designed for space.

But assistant professor of Space and Society at Arizona State University, Timiebi Aganaba, disagrees. “I see space as a canvas for the human imagination where we can paint a future that we want, but it’s more of a mirror that actually reflects back who we are,” she says. “And so if we take this mindset that because we go somewhere far, we can do whatever we want, it continues the degradation of environments in developing countries, it continues the idea that these big countries can just go somewhere where there are no regulations and do what they want.”

Chou himself says regardless of the answer his company is building something bigger than the term a single regulatory regime, or nation, and wants to make sure he can leave behind as many of the problems on Earth as possible. “When you divorce yourself from the political system, the currency system will naturally have to follow as well, because there’s no currency without the political system that enforces it. And what that political structure looks like, hopefully, is an improvement on what we see right now on Earth.”

first two of three licenses it would need to physically settle bitcoin futures, meaning dividends would be paid in bitcoin instead of cash.

Before the year was over, however, two of LedgerX’s biggest competitors, foes of the old-guard that Chou wanted to defeat, beat him to the punch. Since the Chicago Mercantile Exchange (CME) and the Cboe Futures Exchange (CFE) were already licensed they were allowed to add new assets, including bitcoin, through a process called self-certification. What had taken Chou three years to that point, and would eventually take three more, the finance giants had done in six weeks, according to a CFTC statement. “We knew that by being first we might be a little too early in that we’re subsidizing the other competitors’ education,” says Chou.

Applying the lesson his mother taught him, in 2017 the company’s finances got so tight the Chous took out a line of credit against their home and sold their wine collection to pay their staff. Caught in the quagmire of government bureaucracy, with dwindling resources, Chou says he started to go stir-crazy. Past employees complain he was distracted from the task at hand, keeping the team busy building an “oracle” that would answer basic questions on the site’s home page. But it was also during this time that he, Juthica, and other members of the LedgerX team started sketching out StarCoin.

Progress on interplanetary cryptocurrency however was pleasantly interrupted on the morning of June 25, 2019. The CFTC published a statement approving LedgerX as a Designated Contract Market, seemingly the last piece of the puzzle for trading bitcoin futures. That afternoon Chou pre-maturely sent a celebratory tweet from the LedgerX account, declaring they were “officially licensed to offer our physically-settled #btc spot and derivatives trading to all investors,” triggering one of the messiest fall-outs in the history of crypto, ending with both he and Juthica losing their jobs at the company they founded.

Though Chou is quick to point out the value he sees in regulators on Earth he and his investors believe space is an opportunity to build something bigger. “Interplanetary commerce will change the way humanity views itself by giving perspective to all of us,” says Khalfan. “And having us focus on humanity as a whole rather than fighting between ourselves on this planet.” Chou concludes simply: ““Stacks of cash don’t do much on Mars.”