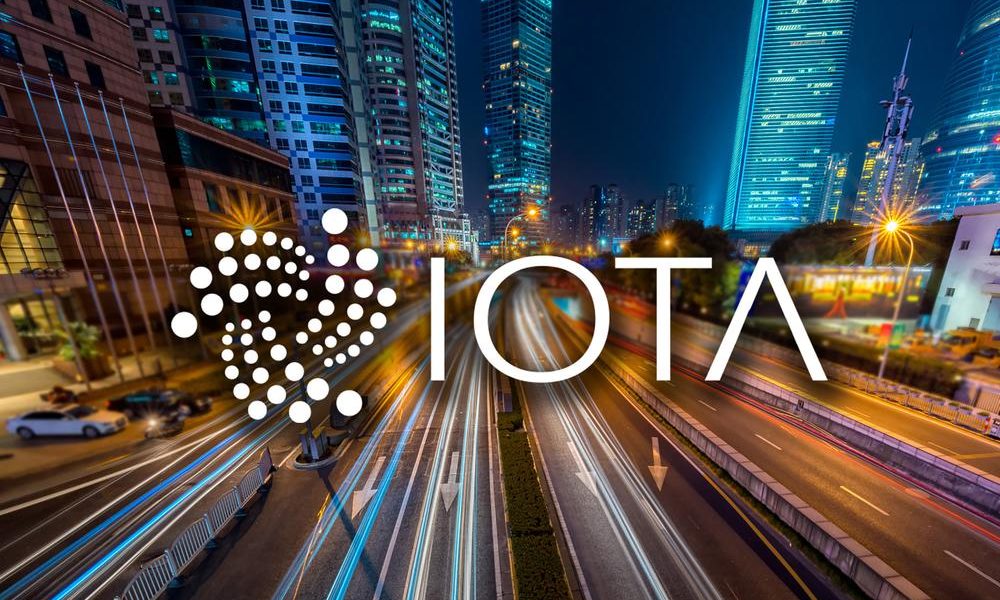 Environmentalists have been discussing the huge amounts of energy consumed by distributed ledger technologies (DLTs) built on the PoW consensus mechanism. A Digiconomist data estimates that the Bitcoin network’s energy consumption rate is about 205 TWh yearly. That amount is nearly the amount of energy consumed throughout South Africa.

By contrast, the IOTA DLT will use an advanced access control algorithm that doesn’t involve PoW; thus, it consumes less energy. The IOTA is built on the directed acyclic growth graph framework. However, new research on the mainnet will be required to prove that IOTA remains an energy-efficient technology.

We ran various tests on a portable, energy-efficient computer (the Raspberry Pi 4B) to determine the energy consumption rate of a private GoShimmer network.

The analysis shows that it takes less energy to Power one transaction of the about-to-be-released IOTA V2 protocol than it takes to light one Christmas light per second. This result is one of the discoveries in analyzing the IOTA V2 prototype to determine its energy efficiency.

One important part of the research result is the significant improvement in the energy consumption required to issue a message in GoShimmer. The team obtained this result via the simulation of the PoW as the network’s spam protection method under the IOTA congestion control algorithm (ICCA).

The GoShimmer test results reveal that 0.00678 joule is the energy consumption of one data transaction per node with a network activity of 50mps. *MPS represents messages per second. One joule is the equivalent of one watt-second.

This amount is the energy used to light up a Christmas tree light for a second. Also, the drop of a tomato from a height of about one meter results in one joule of kinetic energy gain. The table below compares the two primary energy consumption data when running a 1W LED for a second. 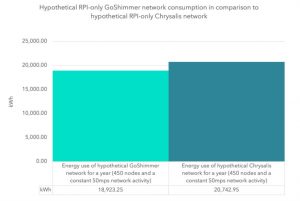 When comparing the energy per message and node metrics, it is important to consider the energy that the hardware device is consuming. Remember that the nodes are running on this device. A hardware energy consumption is required before a message can be processed. Using the table above, the Raspberry Pi is the hardware device, and it consumes a little over 2W, which is still on the low side. 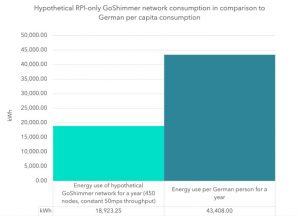 It is also important to note that this hypothetical network’s annual energy consumption rate is 204.5 TWh. This amount is only 0.000009 percent of the Bitcoin network energy consumption rate per year. The latest Chrysalis upgrade made the IOTA protocol more energy efficient. After the Chrysalis upgrade, the team also performed various tests to confirm that IOTA V2 will maintain its energy efficiency.

One of the tests was an IOTA V2 without a PoW. The test results indicate that 0.00678 joules is the energy consumption needed to process a 50mps throughput data transaction. In contrast, issuing a transaction with PoW in Chrysalis will require 99.83 percent more energy than estimated above.

The latest IOTA upgrade (the Chrysalis upgrade) consumes 4,025 joules for a single transaction. The table below compares energy consumption per message between GoShimmer and Chrysalis with and without PoW.

Figure 3. Table of comparison for benchmarks of energy consumption per message

Based on data from the table above, there is a significant decrease in the energy consumption for issuing a transaction on Chrysalis with PoW compared with GoShimmer. However, the Chrysalis without PoW column shows that message processing in GoShimmer consumes higher amounts of energy.

The new GoShimmer components, such as the consensus-related modules, are the main reason for this increase in energy consumption levels. Before now, achieving consensus in the Chrysalis network required the Coordinator’s milestone message referencing the request for a consensus.

Since the GoShimmer no longer contains the Coordinator, processes have become more complex; thus, requiring more energy. It is important to note that this comparison which indicates a significant decrease in energy consumption, is important to smaller networks.

Related: May the rewards be with you: IOTA starts Shimmer and Assembly staking

However, the energy consumption in GoShimmer will be higher than in Chrysalis for large networks. It is even more pronounced due to the current PoW difficulty. Suppose there are 100 nodes in a network. A message from one node will require the receiving nodes to process the message 99 times.

Consequently, the processing of a message in larger networks consumes greater energy, thus, negating the decrease in energy needed to issue such a message. Apart from the network size, the hardware device also contributes to the total energy a network consumes.

It is important to note that servers from data center providers are used to run the majority of the nodes on the IOTA mainnet. We use energy-efficient Raspberry Pi computers to run the nodes in our example network.

This result is great news. It proves that GoShimmer and Chrysalis consume similar energy amounts even though introducing new protocol components into GoShimmer has increased its complexity. Furthermore, there are no recent upgrades to the GoShimmer prototype code. However, there have been recent upgrades to Chrysalis’ mainnet node software.

Hence, there is a possibility for greater energy efficiency in the IOTA V2 solution. Also, spam attacks on the network might push developers to increase the PoW difficulty in Chrysalis. If this happens, the energy consumption level will increase.

Generally, the research outcome is good news. Values for the number of nodes and network activity in the example IOTA network and the current IOTA mainnet are similar. Furthermore, developers can still optimize GoShimmer to enhance its efficiency since it’s a research prototype. Hence, there is cause to be positive about the future of IOTA in terms of its energy consumption.

The increasing climate change rates make it compulsory for authorities to continually evaluate technological inventions affecting human lives, especially DLTs. “Our research shows that IOTA V2 has no adverse effect on the environment as it consumes little energy.”

This research further proves that there are some DLTs for digital sustainability solutions that can assist authorities in achieving their clean climate objectives. For instance, the IOTA foundation has partners from all over the world. The foundation raises funds through them to research and develop useful technologies for various purposes.

Notable examples of such products are the Digital MRV and the trade logistics information pipeline (TLIP). These technologies must consume low energy since they are part of digital solutions for sustainability to achieve clean environment goals. Hence, the IOTA protocol is the best option to achieve this goal. It is simple and energy-efficient.

Possible improvements in the future

The IOTA V2 is proof that the IOTA’s low energy consumption makes it environmentally friendly. DLTs need to be transparent about energy consumption data. Thus, regulators and investors can make better decisions about this sector. The report added, “we hope to inspire other projects to follow our lead by conducting and sharing the energy consumption profile of their protocols.”

Further research about the IOTA technology will provide more insights into its effect on the environment. Other researchers are welcome to conduct their studies about the energy consumption of IOTA V2.

Other aspects of the research can include the IOTA mainnet’s energy consumption. Other protocols would benefit from these comparisons. Also, some researchers’ focus can be on continual updates about GoShimmer and its energy consumption rates, especially after the next upgrade to it. A full report of this research is available here.