The District of Columbia is suing MicroStrategy and its Executive Chairman Michael Saylor for allegedly never paying any income taxes in the district in the more than 10 years he has lived there, Attorney General Karl Racine announced.

Racine added that the District of Columbia is also suing MicroStrategy for “conspiring to help him evade taxes he legally owes on hundreds of millions of dollars he’s earned while living” in Washington. 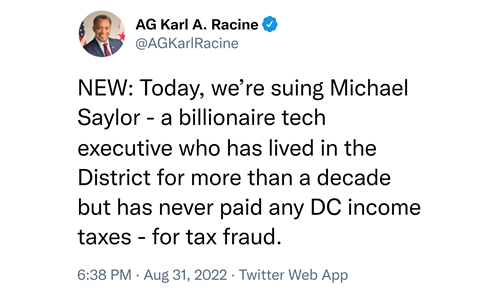 In a follow-up tweet, Racine also added that this if the “first lawsuit brought under [the district’s] recently amended False Claims Act encouraging whistleblowers to report residents who evade our tax laws by misrepresenting their residence.”

In a statement, Saylor that that although MicroStrategy headquarters are in Virginia, he had moved to Miami Beach and is looking forward to a “fair resolution in the courts.” The attorney general’s office alleges Saylor avoided paying more than $25 million in taxes to the district and is seeking back taxes, treble damages, civil penalties, expenses, and fees.