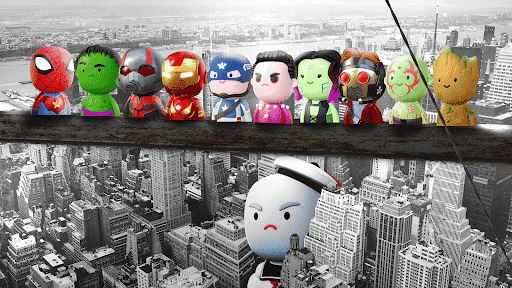 Non-fungible tokens (NFTs) continue to make the headlines. NFT adoption is gaining pace across various sectors, and the entertainment industry can benefit the most. NFTs have often been associated with crypto art, gifs, short clips, and other forms of digital content, but the world has never seen an NFT animated series. Mogul Productions, a DeFi and NFT marketplace platform focused on the entertainment industry, addresses this deficiency and presents the first-ever NFT animated series, the Mogies.

Created to celebrate 100 years since the Hollywood sign was erected, Mogies represent a collection of 1,923 NFTs inspired by the last 100 years of Hollywood characters and personalities. The Mogies will be part of the upcoming Mogieland metaverse, currently under development.

NFT Animated Series from Creators of The Simpsons

Mogies were created by Erick Tran and his team at CHAVVO Studios – an award-winning full-service transmedia production company that has served major Hollywood studios, including Disney, Universal, Marvel Entertainment, and Sony Animation, Cartoon Network, FOX, Dreamworks, Nickelodeon, and EA. The team has worked on many animated classics, including The Simpsons, The Simpsons Movie, Kung Fu Panda, Monsters Inc, and more.

Mogul’s animated NFTs have an interesting story for its metaverse. Mogies are aliens that feed on entertainment. They are associated with Hollywood icons from the last century, interacting inside Mogieland through exciting adventures. They can be action heroes, villains, talk show hosts, children’s characters, fighters, princesses, or other Hollywood-inspired characters. Some Mogies have angel wings, meaning that the characters they represent have passed away. Also, there are different tiers of rarity, and the top 23 NFTs in Tier 1 have a STAR on the Hollywood Walk of Fame.

Several characters from the collection have already been selected to be part of the Mogies Animated series, which will be a first of its kind in the NFT space. As more episodes are produced, other Mogies will also join the cast.

Once the animated series is launched, Mogie owners will have the IP rights to their Hollywood-inspired NFT characters forever. Users will own a piece of the TV series, and a special ‘thank you’ will be displayed in the credits at the end of episodes to select holders.

Besides the animated series, all the NFTs will be part of the Mogieland Metaverse, inspired by the traditional landmarks of Hollywood, Sunset Boulevard, and the Hollywood Hills. Here is what NFT holders will be able to do in the upcoming metaverse:-

Everyone can access the Mogieland metaverse. Visitors are free to enjoy the walkaround environment, but only exclusive NFT holders will be able to act as the STARS of cinema and enjoy unique experiences and privileges.

As Mogul Productions is expanding its ecosystem, which is already growing fast, Mogie owners will enjoy more perks, being the first to benefit from the new features.

To ensure that the metaverse and the Mogies ecosystem thrive, half of all 7.5% secondary market royalties will be allocated to fund the project’s growth. Also, 10% of all future rewards from the Mogies animated series, wearables, collectibles, or lines of figurines will be distributed to Mogie NFT holders as rewards quarterly.

Mogul is the best example of how blockchain can transform the movie and entertainment industry through DeFi and NFTs.