Welcome to the Myriaverse, one of the first pioneering blockchain gaming ecosystems. It provides an inclusive connection with multiple game publishers and other third parties.

With Myria gamers and devs can join a full suite gaming metaverse and players can choose to join any games they like.

At the moment, the market is still dominated by individual and fragmented games. Myria is taking the lead to form a bridge between those scattered worlds and chain them into one unified space.

There, you will have free choices among a vast list of top-tier blockchain games. There is little doubt that the future of gaming is interconnected.

What is Myria All About?

Myria is in its development phase, and recently closed a private node sale in April 2022. This milestone was followed by an Alliance Sigil NFT free-to-claim drop to be launched this May.

More new hot campaigns will be dropped soon by the founder.

With Myria, every gamer, blockchain enthusiast, NFT investor and trader can participate. Developers and B2B third parties can gather in one single ecosystem and enjoy the seamless flow of the immense gameverse. 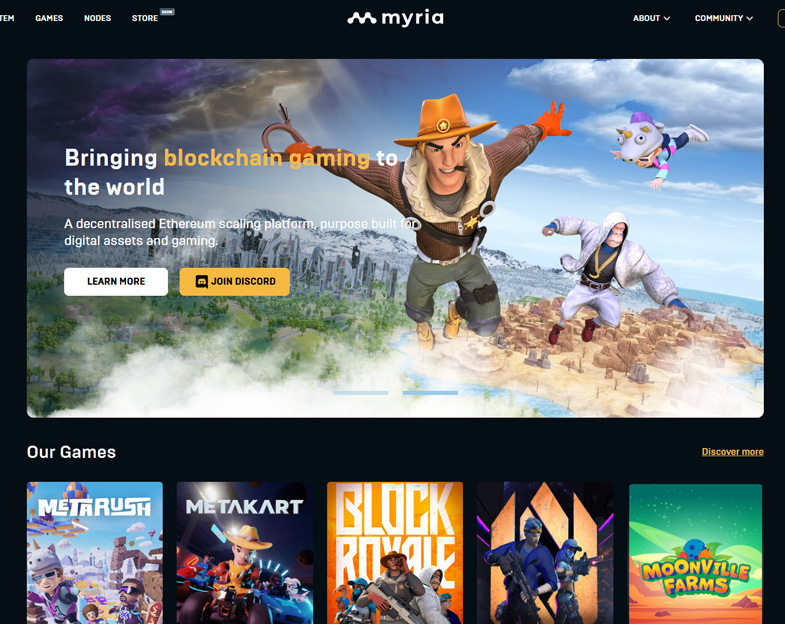 Myria has loads of great features under development. They are all built to work together. Let’s take a look at what is on offer for gamers and devs.

The first and foremost premise of Myria is games and applications. In particular, the Myria team and their key partners are working on mobilizing a collection of diversified game genres powered by blockchain technology. All activities and other user benefits will be mainly generated based on this foundation.

In addition to building and integrating new games, Myria is also allocating resources to develop numerous tools in order to enhance the quality of playing and trading experience.

Myria users are also given access to the full platform package inside the ecosystem, including Myria NFT Marketplace, Myria Wallet, Myria Game Platform.

With the mission to upgrade and provide brand-new gaming experiences, Myria has been working on an Ethereum L2 solution for better scalability.

Along with Myria Developer APIs and SDKs, now external developers and individual game publishers can simply plug into Myria’s vault and use the tools without complicated redundant processes such as working through smart contracts. 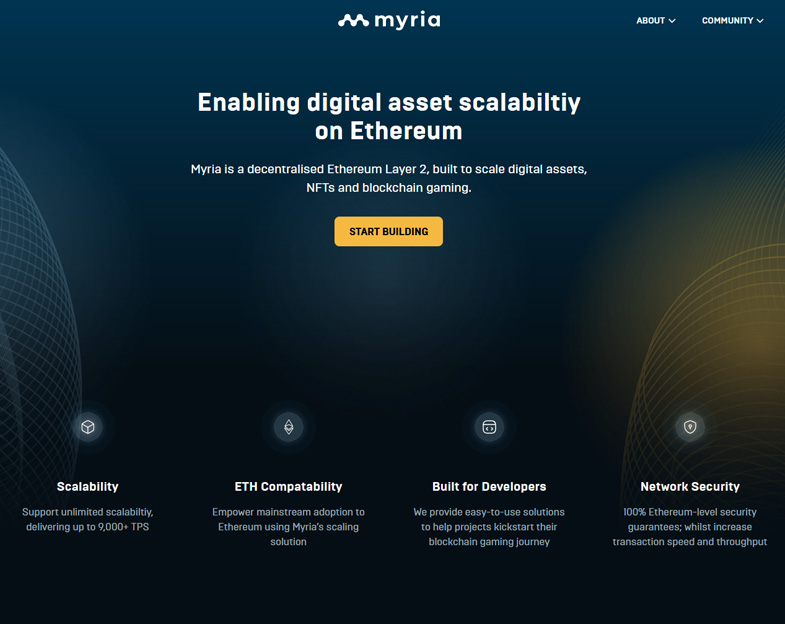 Who Can Use Myria?

Gamers and blockchain devs are an indispensable part of the community of Myria, and all are welcome. There are not at all any restrictions for new members, and devs can have easy access to the interconnected platform.

Anyone who joins Myria can play the games totally free-of-charge, without needing to pay or pre-invest in any assets if they do not wish to.

But that is not all, as Myria is happy to work with the node owners who make the universe work at a technical level.

Any developers interested in blockchain that don’t have the proper infrastructure capability are more than welcomed to jump into Myria’s open source code.

Similarly, node owners are a treasure to Myria as its chain runs with the support of a network of player-run nodes. Home computers can still become a Myria node operator and earn rewards for their contribution to the network.

Like any other DeFi project, Myria will issue a native token called $MYRIA which will be used to facilitate all activities of the ecosystem and power the governance mechanism.

The $MYRIA token is the main currency for buying, trading, upgrading, voting, receiving incentives and rewards and more. There will be new features to look forward to at this early stage,and more will come later.

Myria is creating the premier spot for blockchain game fans all over the world. The first step is to include as many hot blockbusting games, regardless of genre or origin, as long as they are blockchain-powered. You can bet that dozens of other great titles are coming very soon.

Myria gamers can also utilize the utility token $MYRIA to conduct tons of activities, such as creating, buying, selling, trading their own favorite NFT item collections.

The whole ecosystem is interconnected across user wallets, the marketplace and the exchange platform that allows transactions to run through without latency and reduce fees for players.

One of the best features of Myria’s gamefi is that the platform opens the gates and offers users complete control over their in-game assets and verifies their ownership thanks to the cutting-edge blockchain technology.

Great Offers For The Entire Ecosystem

Myria didn’t forget anyone. Anyone who supports Myria will be able to gain for their support.

Activities on Myria’s ecosystem network including initial tests, block production and validation are empowered by the running of nodes.

For this reason node owners have a crucial role as validators, in addition to supporting upgrading auxiliary network functions to get more rewards.

Along with the advancement of the platform in the future, those tasks will require the expansion of decentralized storage of network information, and governance voting for critical decisions such as to determine on game concepts. In exchange for the participation, node operators will earn daily rewards in $MYRIA tokens as well as NFTs drops in-line with their reputational score based on their contribution to the general community.

This reputation is established by their activeness, the amount of tokens they have for ownership or staking, uptime metrics and record of supporting the network.

The higher the score, the more rewards node owners will receive as thank-you from the founding team.

Another noticeable feature on Myria is the introduction of the world’s very first Morphing Interoperable NFTs (TM), which sets a totally new standard for interoperable NFTs.

With that new standard, Myrians will be able to verify their digital identity and ownership over their virtual assets.

At the same time, Morphing Interoperable NFTs allows the NFTs to be recognized across multiple games, spaces and avatars in the same Myria.

That’s how Myria constitutes, integrates and maintains the streamline experience for blockchain gamers.

At the moment, Myria is still undergoing development and will soon be launched to the public.

Myria is positioned to become the first light in the dawn of blockchain gamification, and early adopters will surely be in a position to gain.