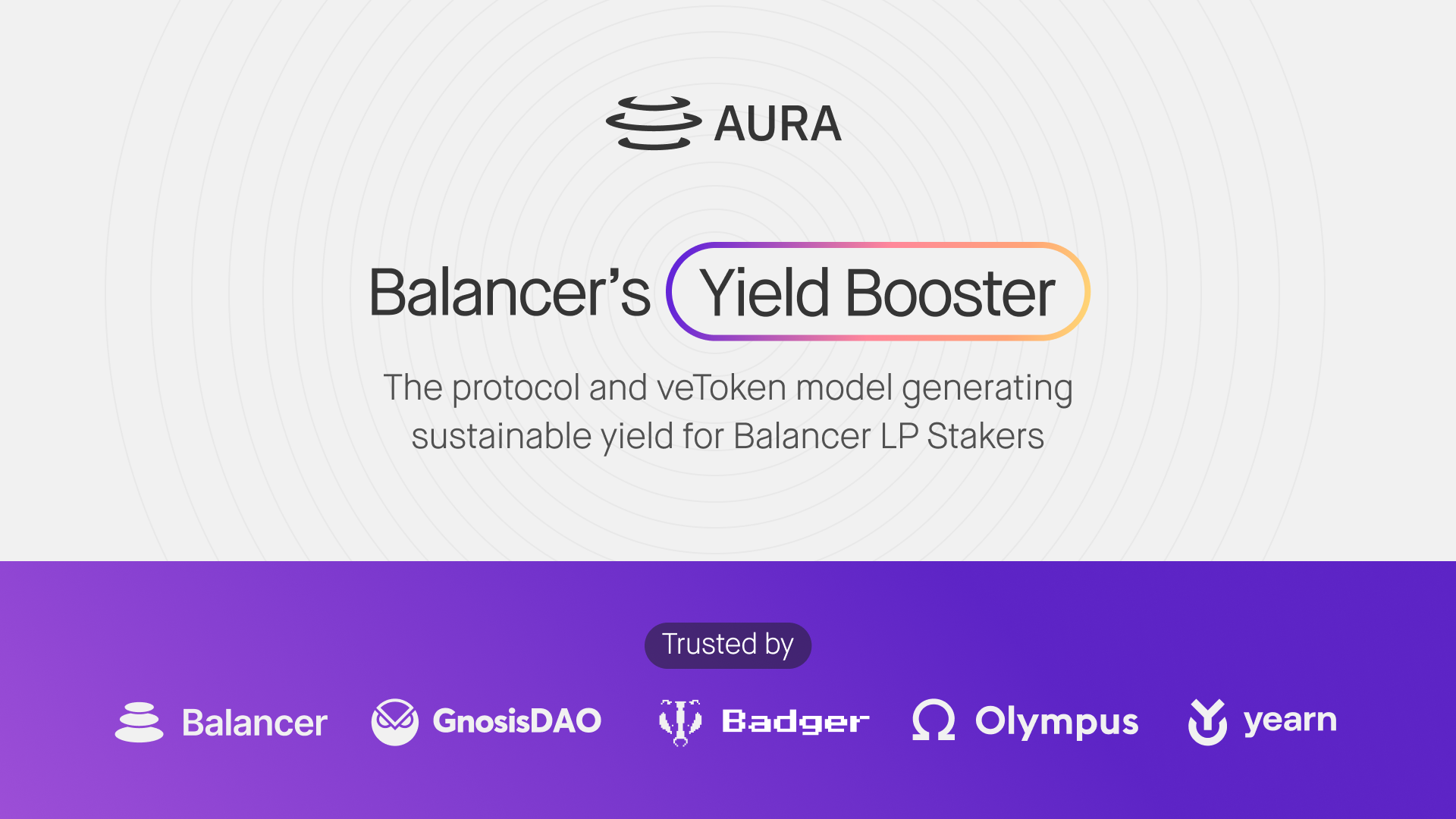 The Balancer Wars are getting more complicated. In the last few months, there has been a heavy focus in not only accumulating BAL tokens, but also veBAL, the recently announced vote-escrowed token of Balancer.

DAOs like Olympus, Lido, and Gnosis, that have already contributed millions of dollars to the Balancer ecosystem, are now focused on passing proposals that accumulate more veBAL, and are similarly looking at partnerships with protocols and tokens that are able to deepen their veBAL yields.

And yet, while the Balancer Wars might have just begun several months ago, certain holders have already picked up on the similarities between the wars of Curve Finance and Balancer.

Curve’s past may be Balancer’s future

Back in simpler times, there was Curve Finance, the predominant stablecoin AMM that not only kept stablecoins properly pegged to a dollar, but also provided low trading fees for any investor that needed to perform stable swaps.

In order to maintain its competitive advantage, Curve created veCRV, which is rewarded to holders that have locked their CRV. As veCRV is Curve’s governance token, it allowed holders to gain boosted yields on their CRV, take a portion of Curve’s revenue, but most importantly, have the power to vote on its governance proposals.

By allowing veCRV holders to vote on important decisions like the amount of mining rewards for various liquidity pools, this created a desire for whales and protocols alike to gain majority influence on veCRV.

As veCRV gained traction and utility through the Curve Wars, Balancer took a couple of pages off Curve’s ve tokenomics model shortly after.

veCRV vs veBAL: A Comparison

Ultimately, Balancer utilized a similar ve tokenomics model by creating veBAL in March 2022. By accumulating veBAL, holders were allowed to not only vote in Balancer’s governance proposals, but also obtain the additional yields earned on BAL tokens, as well as a share of 75% of fees generated from the protocol.

Additionally, if users wanted to continue holding veBAL, they needed to extend the lock period of their BPTs regularly, otherwise their veBAL can decay to 0 if left unattended.

The gap was clear – Balancer users started to realize that they wanted to hold their veBAL for a longer period of time, and also multiply their veBAL yields in a similar way Convex was to Curve.

Aura Finance was built with a clear purpose: to provide maximum incentives to Balancer liquidity providers and veBAL holders.

It first launched its native ERC-20 token, AURA, in June, which controls Aura-controlled veBAL at a magnified ratio. As of Aug 2022, AURA has already reached a TVL of $316M.

In terms of security, Aura has also completed a total of 3 security audits in the last few months, complete with an active bug bounty program, and uses fork tests for test deployments.

Aura Finance also launched auraBAL, which served as a liquid wrapper for Balancer’s veBAL. To receive auraBAL, users would deposit liquidity to the 80BAL-20WETH pool on Balancer, and then convert to auraBAL on Aura before staking.

From here, auraBAL holders can decide to stake on the platform, where they would receive not only the regular Balancer admin fees they would get for normally holding veBAL (BAL and bbaUSD revenue), but also additional BAL from Aura’s performance fees, and AURA. Users can trade their auraBAL back to BAL at any time.

Alternatively, auraBAL holders can choose to contribute to the Balancer pool auraBAL/[80/20 BAL/ETH BPT]. Users can then stake the auraBAL BPT token on Aura Finance to receive a separate pool of AURA rewards for providing liquidity to others to enter and exit the ecosystem via the auraBAL token.

Overall, auraBAL provided clear utility for the Balancer ecosystem. Its rewards are currently a multiple of native veBAL rewards, and scale as Aura accumulates more veBAL. auraBAL also eliminated the need to relock veBAL regularly, and it can be locked for up to 16 weeks.

Building on top of auraBAL’s utility, vlAURA was then introduced. Users would lock their AURA to receive several privileges: the ability to vote on changes to the Aura protocol, direct Aura treasury, vote on the outcome of Balancer snapshot proposals, and directly be rewarded additional auraBAL.

vlAURA holders also could utilize their vlAURA to participate in Balancer gauge voting, with markets like the Hidden Hand that allowed vlAURA holders to earn substantial revenue for their votes.

With auraBAL and vlAURA providing direct utility to its holders, several DAOs that were heavily involved in Balancer ecosystem have also began to be more active in accumulating AURA, auraBAL, and vlAURA.

Gnosis DAO, converted in excess of 100,000 veBAL into auraBAL and deposited $2.2M into Aura’s Boosted Aave stable pool. Badger DAO, known for accumulating a lot of BAL tokens, has also accumulated AURA in its treasury for use in gauge votes. It has also recently launched graviAURA, which is a semi-liquid AURA token that automatically votes for Balancer pools it is included in, and allows AURA holders to deposit their AURA and earn yield from auto-harvested bribes.

Other DAOs have also been focused on passing Aura-related proposals. OlympusDAO recently passed a proposal, OIP-110, that aims to add BAL and AURA to the strategic assets whitelist as its treasury wants to maximize veBAL controlled per dollar spent.

On the other hand, citing the participation of DFX, Rocketpool, Stader, and FiatDAO in their Hidden Hand gauge incentive market for Aura, Redacted has proposed to lock all AURA coming into their treasury in order to drive more yield to strategic partner pools, and to continue relocking the AURA as it comes off lock to maintain access to the benefits of holding vlAURA for six months. Redacted will then use the vlAURA voting power on pools beneficial to the Redacted ecosystem.

Temple has recently announced its participation in the Balancer Wars, as it has deposited $5M worth of assets to the Aura platform, and has begun incentivizing both veBAL and vlAURA votes through RedactedCartel’s Hidden Hand. Olympus has also will also be adding $3m of its own liquidity to Aura, and potentially allocating incentives to Hidden Hand for that pool.

And to top it all off, Aave (through DAO contributor Llama) has announced that they intend to “become an active participant in Aura’s governance and utilise the AURA inflation schedule to mutually support growing Aura Finance’s and Aave’s TVL.”

In only a span of several months, Aura has managed to build not only clear multiplier effects for the Balancer ecosystem, but also traction and utility within its own ecosystem by providing clear utility in the gauge incentive market with vlAURA. And while there has been no official winner to the Balancer wars just yet, there’s no denying that Aura and the ecosystem its built has become a very strong early contender.Interested in being a part of the AURA and Balancer ecosystem?

Check out app.aura.finance and stake your Balancer Pool Tokens (BPTs) to triple, on average, the yield rewards on Aura as compared to staking your BPTs in boosted Balancer pools!