A look at the limitations of blockchain’s irreversible transactions, from technological failures to hackers and ransom demands shows there is a lot to be desired.

Reversibility is required to tackle these issues, and how it must be able to do so without jeopardizing blockchain’s merits. Introduce the solutions proposed by t3rn – and many problems are solved: Execution changes are escrowed, so that they can be reverted if they fail.

t3rn Has the Solutions

When interacting with third parties, one of the most critical difficulties that businesses confront is a lack of trust.

Due to a lack of confidence and transparency, organizations act cautiously. Consequently, they spend a significant amount of time and money on intermediaries when settling agreements.

The innovation of smart contracts can assist by removing intermediaries when contract conditions are visible to the public.

These contracts use blockchain technology to promote trust and transparency between two parties. They enable the creation of persistent and accessible contracts. 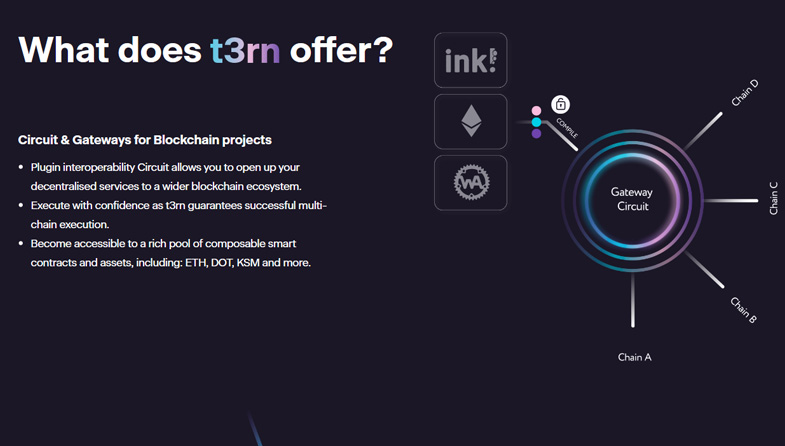 t3rn, which is pronounced as ‘tern’ , was founded by Maciej Baj, former Head of Development at Lisk, to address certain key challenges in blockchain.

t3rn was supported by the Web3 Foundation grants program, and it has since become one of the most exciting initiatives evolving as part of Parity’s Substrate Builders Program.

In particular, the site has fully delivered on its four milestone grants in December 2020 with a fully operational proof of concept.

The smart contracts can be uploaded in their current state, and the t3rn protocol will host and execute them across several blockchains.

From there, the platform helps to remove the barrier to serving users from diverse industries and blockchain platforms.

Smart Contracts Could be Smarter

Smart contracts are a relatively new technology that has the potential to improve productivity across a wide range of sectors.

More firms will embrace technology to minimize costs and promote rapid and secure transactions as technology develops. Smart contracts can operate as agents that settle agreements when agreement specifics are visible publicly and digitally.

In a more in-depth definition, smart contracts are a revolutionary layer of blockchain technology that enables users to converse and transact with one another through a “robotic middleman.”

Specifically, a smart contract is a self-executing collection of code that automates tasks that would otherwise have to be completed manually.

As a result, they are widely used by DeFi developers to execute flash loans, normal loans, staking, and other special features.

And t3rn is one of the top hosting platforms which offers a long list of indispensable features for smart contracts.

t3rn has established many significant milestones within the industry that boosts the firm’s reputation to DeFi users. At first, the site commenced with

Delivered as part of the Web3 Foundation grant for the platform, demonstrating how t3rn enables smart contract interoperability.

Afterwards, the company became a member of the prestigious Substrate Builders Program. Remarkably, t3rn marked their most major milestones by completing a $1.3 million seed round with participation from several of the industry’s most prominent investors.

Moving further, after graduating with a product showcase in the Web3 Bootcamp, t3rn solution was introduced at the two most prominent Polkadot conferences.

Polkadot has been well-reputed for their top tier projects within the blockchain world such as Moonbeam, Astar and Acala.

t3rn took advantage of this opportunity to continue its development journey by collaborating with Composable Finance to demonstrate the t3rn product in action.

Most recently, another foremost event was highly noticed that was the completion of Polychain Capital leading a $10 million strategic sale for the platform.

t3rn’s key features are described as the main reason that creates its strong reputation within the blockchain industry.

With the four main functions: plug-in interoperability, fail-safe for cross-chain transactions, composable and reversible interoperability, t3rn is a supportive tool that should not be missed for smart contract development.

The first feature is plug-in interoperability. This means whether or not parachains support smart contracts, the protocol functions well with them.

As a result, t3rn highlights existing decentralized solutions and enables many blockchains to cooperate on the same contracts source.

The ability to construct decentralized solutions with the flexibility to run on various chains is facilitated by reusing the entire decentralized application blocks.

Moreover, interoperable systems are difficult to design because they need developers and users to work on several blockchains, possibly creating various accounts, collecting multiple currencies, and allowing separate blockchains to communicate with one another.

t3rn simplifies the process by providing services and packages that enable secure interoperability.

The second feature is called reversible interoperability, and it is seen as the feature that solves most of the obstacles that blockchain transactions are facing.

Before, a transaction is non-reversible after it has been applied to a blockchain. This has raised a significant concern for transactions that are only beneficial if they succeed on different blockchains at the same time.

The third feature is the ability for composable smart contracts. In specific, each successful Composable Smart Contracts compilation is immediately ready for usage by the network.

On-chain contract hosting is comparable to the decentralized package management established by the t3rn developer community.

All newly produced interoperable programming code is automatically accessible and reused by other developers.

From this, developers can share code for free or anticipate remuneration per usage. Projects can simply cooperate by sharing and reusing the business functionality.

Significantly, this provides a means for developers to get money by producing Open Source code.

To make it even more convenient, smart contracts can be created in a variety of programming languages, including Solidity, !ink and WebAssembly.

Existing smart contracts can be uploaded in their current state, with no need to rewrite them.

Last but not least is fail-safe for cross-chain transactions.

Multiple blockchains imply that users and the storage they are allotted are on separate chains.

There is no certainty that the state of accounts will not change while the interoperable transaction is completed without the comprehensive synchronization mechanism.

t3rn is a future home to all smart contracts due to its unique features. The platform is being recognized as a revolutionary step forward in blockchain technology.